Wise was created back in 2011 when Balthazar Neveu a.k.a Bigbalth was living in Barcelona. Back then, the team was made of scooter riders who had been here for a long time and got an actual job. The question was mainly: « Being unsponsored and getting older, are we going to keep on riding? ». So Wise was made to try to unite this population of older scooter riders and try to keep the memory of old times – back when scooters could still be folded. The purpose of Wise was straightforward: « let’s do it on our own with no investors from the wild business world and let’s grow slowly Rider owned doesn’t mean anything if you’re just using it to pretend to be cool. The purpose of it is a total freedom of development.  This is where Wise started. 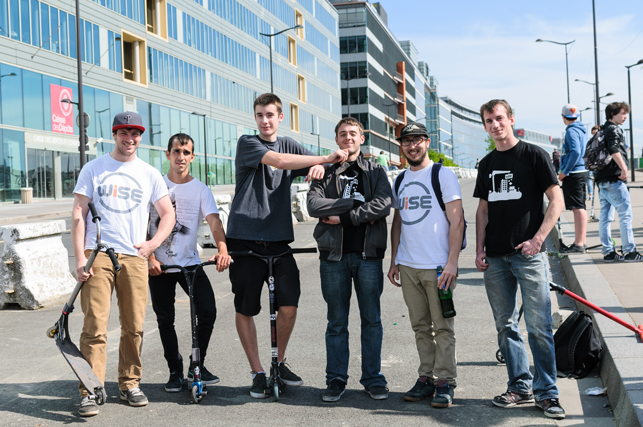 Balthazar realized that young blood was much more commited toward scootering so it was clear that a change had to happen and Alexis Cuv’ joined Wise and started to film his next level tech edit. In 2012, Travis House came for the first time to France and joined Wise with a Welcome edit from Roots Boy Production. We kept the same formula of riding and started to film a DVD from 2012 to May 2014 with the new team.

After filming the DVD together, the young team got to a certain point where it was clear that a brand could be launched. And we made it!

From apparel to scooter parts

Among the team, talents was also here not only for riding but also to create the scooter parts we always dreamt about. We quitted the idea of apparel and tackled the real issues from 2014 to 2016 to produce scooter parts.